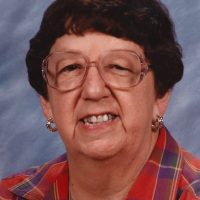 She was born on August 29, 1929 in Sallisaw, Oklahoma, the oldest daughter of Alma Mae (Moore) Wheeler and William Richard “Buck” Wheeler, whose family was involved in the founding of Sallisaw. Ms. Wheeler was Valedictorian of the Sallisaw High School Class of 1947.  She earned her bachelors degree from OSU in Stillwater and her masters degree from Columbia University. She started her teaching career in Marble City, taught in Japan for one year and in Tulsa before traveling to New York where she taught for 15 years. She lived in Bogota’, Colombia in South America for 26 years, where she taught the children of missionaries through Wycliffe Bible Translators. She was trained in translation and survival due to the remote and undeveloped areas in which she ministered.  Nancy never had children of her own, but showered her 12 nieces and nephews with gifts every time she returned home. She had a wealth of Bible knowledge and had written the entire New Testament in her own handwriting. She was a faithful member of the United Methodist Church of Sallisaw, where she taught Bible Study for many years. Nancy passed this life on February 10, 2022 in Sallisaw, Oklahoma.

She was preceded in death by her Parents; 2 Brothers: Richard Perry Wheeler and James “Wag” Wheeler and her Best friend and Sister-in-Christ: Priscilla Bartram.

Visitation will be 10 am – 6 pm Saturday and 2 – 8 pm Sunday at Agent Mallory Martin Funeral Home in Sallisaw.