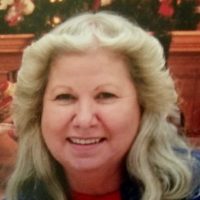 Funeral Service for Nettie Fay (Boling) Hubler, 73, of Vian, Oklahoma will be at 2:00 PM on Friday, October 8, 2021 at The Church of Jesus Christ of Latter-day Saints in Gore, Oklahoma. Burial will follow at Box Cemetery in Vian, Oklahoma under the direction of Agent Mallory Martin Funeral Service, Inc.

Funeral Service for Nettie Fay (Boling) Hubler, 73, of Vian, Oklahoma will be at 2:00 PM on Friday, October 8, 2021 at The Church of Jesus Christ of Latter-day Saints in Gore, Oklahoma. Burial will follow at Box Cemetery in Vian, Oklahoma under the direction of Agent Mallory Martin Funeral Service, Inc.

Nettie Fay (Boling) Hubler was born at Vian on April 20, 1948, the daughter of Ralph Boling and Goldie Agnes (Risley) Boling. She had a twin brother, Eddie Ray. Her family moved several times when she was young. Shortly after her birth they moved to El Reno, OK then back to Vian where they lived on HWY 82 down the hill from the Vian cemetery. Her twin brother, who was born with poor health, passed away at the age of 6 years old while they lived there. After several more moves around the county, including across the road from Box Cemetery, Pack Corner at Blackgum, and Vian Bottoms, Nettie began attending school at Vian. Later her mom moved them to a house on the corner of HWY 64 and 82 where they lived until she got married. Nettie had naturally red hair and because of this everyone called her Red. She recounted a story about starting 1st grade. When the teacher called roll, she didn’t answer to the name Nettie. She argued with the teacher that her name was Red and wasn’t satisfied until her mother convinced her that Red was her nickname. Many members of her side of the family still call her Red to this day.

Nettie was a city girl, that is, if you could call living in Vian the city. When she married her cowboy, Parley Hubler, they moved out into the boonies near Nicut. Parley was a member of The Church of Jesus Christ of Latter-day Saints. Nettie decided on her own, to investigate the teachings of his church and joined sometime later. She remained a faithful member throughout her life. It was during this time period that Nettie gave birth to two children, Parley Jr., born in Sallisaw and Cordelia, born in Stilwell.

For the first few years of cattle ranch living, she was the typical 1960’s housewife. She stayed home and raised kids, kept the house, and had dinner ready when Parley came home.  Then in the early 1970s they moved onto a large ranch in Osage County. Parley was the ranch foreman and main cowhand. It was during this time that the city girl got a real taste of the cowboy life, and she was hooked. At first, she was timid about it. Parley would ask her to help in the corral and she had no idea what to do. He would bark orders and she would get mad and tell him she was going to the house, and he could do it himself. After some time, and patience on both sides, she got the hang of it.

She still kept house, raised kids, and had dinner ready but now she was a cowgirl too.

She learned to ride horses and grew to love it. You could often find her jumping dead tree trunks with her favorite horse Tug.

For Nettie and Parley, the ranch life came to a close by the late 80s. They moved back to Vian on their property on Cato Ridge Road near East Lake Hills. It was during this time that Nettie got the idea to start doing cakes as a business. Nettie’s Cakes became well known throughout the county. If you didn’t personally enjoy one of her cakes you probably know someone who did. Her cakes became a popular item for birthdays, weddings, and other celebrations. She did most of her cakes from a shop near her house but in 2007 she opened a cake shop in Sallisaw. Her dream was becoming a reality until a brain aneurysm cut that short later in the year. She managed to survive the aneurysm, but her cake shop did not. She went back to working out of the shop near her house for several more years until she could no longer physically do it.

Nettie loved clogging and painting. For a few years she was able to combine those loves during the Cookson Jubilee. She volunteered to paint the backdrop one year and ended up doing it several years in a row. During this time, she managed to coax family into joining her on stage. Her daughter, Cordelia, daughter-in-law, Cindy and the grandkids were all part of the crew.

Her paintings became a treasured possession for family and a coveted door prize for the Hubler Family Reunion each year.

Nettie was a determined woman. When she set her mind to something, look out. Best way to get her to do something was to tell her she couldn’t do it. She would do her darnedest to prove you wrong.

She loved going to her grandkids’ activities. If she was physically able to be there, she would.

In later years her time was spent taking care of Parley as his health steadily declined. When he passed in April of this year, she was determined that she would keep on living for those grandchildren and great grandchildren. Although she missed him terribly, she didn’t want to give up and follow him too quickly. However, life had other plans. She fell ill sometime around Labor Day weekend, ending up in the hospital on Labor Day and never left it. She was reunited with her cowboy the evening of September 27 surrounded by family who held her hand and said goodbye as she went to join Parley. She will be buried at Box Cemetery between her sweetheart Parley and her twin brother Eddie Ray.

She is survived by 2 children: Parley Hubler, Jr. and Cindy of McKinney, TX and Cordelia Hubler of Burbank, OK;