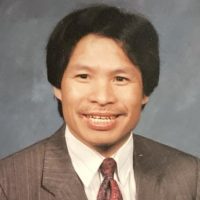 Ouame was born on June 2, 1954 in Khammouane, Laos. At a very young age, he lost his biological parents. By God’s grace and boundless love, at 14 years old, he was adopted by missionaries Dr. Geoffrey and Pat Atkinson who were serving the Lord in Thailand. Thereafter, he attended Bible school for two years when he met his future wife Thongvieng. Ouame and Thongvieng were married on March 22, 1975 and shortly after their beautiful union had a daughter Anna.

To escape the Communist regime, they fled to a refugee camp in Thailand and lived in the camp for two years before resettling in France in 1977. There they had his three sons: Stephan, John, and Joseph and was also where he started his volunteer ministry. In 1985, the entire family moved to the United States and in 1987, Ouame was offered his first full time job as a Laotian Pastor in Whitehall, Ohio. For 14 years, he led the Laotian mission at the Whitehall Baptist Church and spread the word of God to many Laotian families.

In 2001, Ouame and Thongvieng moved to Arkansas to be closer to Thongvieng’s family. He helped Thongvieng on their prosperous chicken farm and led a small Laotian congregation at the Danville First Baptist Church. Unfortunately in 2002, he suffered kidney failure, and after many years of dialysis, his son, John, donated a kidney to his father. He was immensely grateful for John’s selfless gift that gave him a chance at a normal life without dialysis.

On January 18, 2022, Ouame unexpectedly passed away in his home. Ouame will be remembered for his devotion to his wife, his love for his family, and his relentless desire to connect people to the Lord. Ouame’s messages, his smile, kindness, and love touched more people and lives than the words and pages of the Bible that he held near to his heart.

wife, Thongvieng of the home;

He was an uncle, brother-in-law, and friend to many.

Viewing will be 10 AM – 8 PM Wednesday at Agent Mallory Martin Chapel in Muldrow, OK.