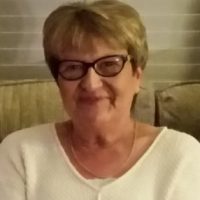 She was born on March 7, 1955 in Sallisaw, Oklahoma to Juanita (Jackson) Bryant-Morse and Eugene Morse Sr. and passed away on September 5, 2022 in Muskogee, Oklahoma. She was married to Steve Lessley on June 29, 1973 in Tahlequah, Oklahoma. She was a homemaker. Patricia (or Mimi to her grandchildren) enjoyed cooking for family or anybody that was hungry. She and her husband enjoyed following the grandkids to their many activities which included band, baseball, football, swim meets, gymnastics, dance recitals, and livestock shows. Some referred to her as the boss of the family and most definitely the chief chef. She was an avid sports fan and loved the OKC Thunder, the St. Louis Cardinals, even Nascar. She attended many Cardinals, and Thunder games.

husband, Steve of the home;

2 sons and daughters-in-law, Brandon and Rachel Lessley of Van Buren, AR and Justin and Megan Lessley of Broken Arrow, OK;

and several nieces, nephews, cousins, other relatives and friends.

She was preceded in death by her parents; and two sisters, Virginia Morse and Joan Bryant.