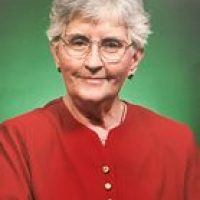 Funeral service is Thursday, July 13, 2017 at 10 am at First Church of the Nazarene in Muldrow, Oklahoma. Burial will be at Blackjack Cemetery under the direction of Agent Mallory Martin Funeral Home in Muldrow.

She was preceded in death by her parents and husband, 2 sisters: Fern and Marion Hastings, Juanita and Odis Cook