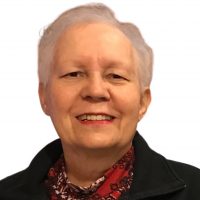 Rebecca “Becky” Ann Boen Mayo was born December 30, 1941, in Muskogee, to Robert E. Boen, Sr. and Rosa Lee (Lewis) Boen. She died in Sallisaw on Thursday, January 14, 2021, following a long illness. She was 79.
A viewing will be held Monday, January 18 from 10 a.m. to 8 p.m. at Agent Mallory Martin Funeral Home in Sallisaw. A private family service will be held at a later date.

Rebecca “Becky” Ann Boen Mayo was born December 30, 1941, in Muskogee, to Robert E. Boen, Sr. and Rosa Lee (Lewis) Boen. She died in Sallisaw on Thursday, January 14, 2021, following a long illness. She was 79.
A viewing will be held Monday, January 18 from 10 a.m. to 8 p.m. at Agent Mallory Martin Funeral Home in Sallisaw. A private family service will be held at a later date.
Following graduation from Muskogee Central High School in 1960, Becky attended Lindenwood College in Missouri for her freshman year before transferring to the University of Oklahoma where she earned a Bachelor of Science degree in Home Economics in 1964.
While at OU, she became a member of the Kappa Kappa Gamma sorority.
After teaching English at the secondary school level in California, Mayo worked for Sallisaw Public Schools in food service after moving to Sallisaw in December 1967. Mayo was active in many phases of the operation of the Sequoyah County Times in Sallisaw since the early 1970s, serving as educational services director and business manager before her retirement in 2016.
In 2003, Mayo was inducted into the Oklahoma Journalism Hall of Fame.
In 2002, she was co-winner, with her husband Jim, of the Oklahoma Newspaper Foundation’s Beachy Musselman Award for outstanding contributions to newspaper journalism.
She believed deeply in the power of education and the ability of community journalism to support and enhance it. In 1992, she pioneered a comprehensive Newspaper in Education (NIE) program for Your TIMES and other small newspapers to provide newspapers, tours, and youth career counseling to students. She was first chairperson of the Oklahoma Newspaper Foundation committee on NIE. She was part owner of Cookson Hills Publishers, Inc.
She was of the Presbyterian faith and an elder of the First Presbyterian Church in Sallisaw.
She was active in many civic organizations and clubs including P.E.O. Chapter G.Y., Onawa Study Club, the Stanley Tubbs Library Advisory Board, Sallisaw literacy council, book club and other charitable organizations. She was a Sunday school teacher, a den leader for Cub Scouts as well as a district leader for Boy Scouts of America.
The family thanks Mercy doctors Bob Nowlin and Phil Agent, and P.A. Chelsea Real, the doctors and nurses of Mercy oncology in Fort Smith, and the caring staff at Carrington Village in Sallisaw.
She maintained a positive outlook and made lifelong friends. As a three-time breast cancer survivor, Becky attended support group regularly. She was loved and supported by her friends and fellow cancer survivors.
Survivors include her two sons, John Robert (Jack) Mayo and his wife Jennifer, of Duvall, Wash. and Jeffrey William Mayo and his wife Beth, of Sallisaw; brother Bob Boen and his wife, Kathie Hillier, of San Carlos, Calif.; sister-in-law, Andrea Mayo Quigley and her husband John of Beaumont, Texas; six grandchildren, Gretchen Kate Mayo, Jacob Wheeler Mayo, Zachary John Mayo and Harrison Walker Carmel Mayo, all of Duvall and Madolyn Rose Mayo and Maddox William Mayo of Sallisaw; five nieces and two nephews; and the current and former staffs of the Sequoyah County Times.
She was preceded in death by her husband of 54 years, James W. “Jim” Mayo, her parents, Robert E. Boen and Rosa Lee Boen, of Muskogee, and sister and brother-in-law, Rosa Lee and Tim Griffin, of Tulsa.
In lieu of flowers, the family asks that contributions be made the Boy Scout Troop 731, c/o First United Methodist Church, PO Box 887, Sallisaw, OK 74955; First Presbyterian Church, PO Box 417, Sallisaw, OK 74955; or the Oklahoma Newspaper Foundation, 3601 N. Lincoln Blvd., Oklahoma City, OK 73105.