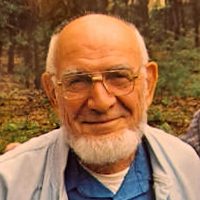 Richard Junior Groleau, 91, of Sallisaw, Oklahoma, passed away at home in Sallisaw, Oklahoma on May 10, 2021. Richard was born on January 25, 1930 in Escanaba, Michigan to Clara Emma (Longhurst) Groleau and Publius Charles Groleau. He was married to Rosa Lee Mae (Waack) Groleau on August 28, 1952 in Tulsa, Oklahoma. The two met at Central Bible Institute (CBI) in Springfield, Missouri. Mr. Groleau was a teacher, having taught in Tulsa, California, Oregon, and China. He became a rancher in 1975 when he and Rosa Lee moved to Sequoyah County, Oklahoma. He was also a carpenter and participated in mission projects in Mexico and Honduras. Prior to CBI, he was in the U.S. Navy, serving 1947-1950 in Guam, the USS Toledo (CA133), and the USS Randall (APA-224).

His wife: Rosa Lee of the home;

Numerous other relatives and friends.

Richard was preceded in death by his parents; his brothers: Al, Edward, Robert, and Jack; and sisters: Virginia, Laura, Bernice, Eleanor, and Rose.

Funeral service will be at 10:00 AM on Friday, May 14, 2021 at Agent Mallory Martin Chapel with burial at Sallisaw City Cemetery in Sallisaw, Oklahoma.