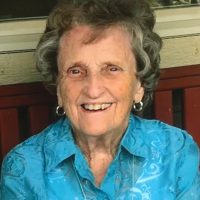 Ruth May Svendsen (née Sandbo) was born on May 16, 1933, in Brooklyn, New York, the fourth of five children born to Oscar and Charlotte Sandbo (née Braaten) who, years earlier, had emigrated from Norway. The siblings are: Otto, who died in infancy; Arnold (Grace) Saunders, deceased; Robert (Muriel), deceased; and David (Myrna), of Setauket, New York.

In her early years, Ruth lived with her family in Brooklyn, with very strong ties to her church, Salem Gospel Tabernacle. She attended Salem with her large and extended family, along with many friends, most of whom shared her Norwegian heritage. Ruth maintained her friendships with many of these friends throughout her life.

While attending Salem, Ruth met Roy James Svendsen, a recent emigrant from Norway. The Svendsen and Sandbo families were old friends from Norway. The couple married on October 27, 1956, in Salem.

Following their marriage, Ruth and Roy continued to live in New York, in the many luxury high rise apartment buildings Roy managed. The family enjoyed weekends and summer vacations at the family’s “country house” in Connecticut, which Roy built, with help with from Ruth and the boys.

In 1977, the family relocated, trading the big city for Oklahoma country living. There, they became innkeepers, owning and operating the Interstate Inn in Roland, until their retirement in 1999. Their legacy endures in their youngest son Rod, who operated the motel to this day.

Living in the nearby community of Liberty, Ruth and Roy were rarely apart. Even during Ruth’s many shopping trips, most frequently to her favorite store, Christopher and Banks, Roy could often be found patiently waiting on a nearby bench. Ruth remained a devoted wife to Roy until his death in 2016.

Ruth was a member of Grand Avenue Baptist Church in Fort Smith. There, she attended John Taylor’s “Monday” Sunday School class and volunteered at the church’s Helping Hand ministry.

Prior to her death, Ruth was a resident of Memory Lane Alzheimer’s Special Care Unit in Van Buren, Arkansas.

Ruth will be greatly missed by her loving family and many friends.