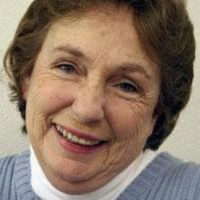 Sally Maxwell was born on September 26, 1942 in Hamilton, Ohio to Atha Murray Longsdorff and Max Longsdorff and passed away on June 14, 2020 in Fort Smith, Arkansas. Sally was very involved with her kids and grandchildren. She was a pilot, an accomplished horsewoman and photographer, loved gardening, board games, Disney World and loved life in general. She was very active in her community and was a well-known face in the news world of Sequoyah County and her death left a hole in many hearts which will be impossible to ﬁll.

Sally was raised in Indiana where she attended the Ernie Pyle School of Journalism at Indiana University in Bloomington. She and her family, including three children Tonya, Mark and Jimmy, moved to Sallisaw in 1979 and she took a job as the Sequoyah County Times Society Editor and remained there as a news reporter and eventually managing editor for over 25 years. She joined the KXMX family as Senior News Director in 2014.

Sally wrote thousands of stories covering every aspect of Sequoyah County. She wrote with integrity letting the reader know the facts. She was a well known face to law enforcement, city and county officials and area leaders.

She never lost sight that her writing was about the county and the people in it, from the news stories, feature stories about everyday people, and of course her popular columns in the times including Your TIMEScope and Sally’s Alley. When Sally joined KXMX in 2014 she continued her witty column writing with Sally in The Mix featuring the antics and amusing life events of her friends and family.

Sally influenced the career path of many and was always willing to give writing and news coverage tips to others. There was never a dull moment with Sally. She inspired the people around her to do their best, to be happy and enjoy life no matter where it took them. She shared her compassionate heart with everyone around her.

Sally’s love for Disney World and child-like joy when discussing all things Disney were well known to her friends. It’s estimated that Sally visited Disney World in Florida 10-15 times. Sally seemed to have ridden every ride and eaten every snack in Disney’s theme parks. She loved to share tips and recount fun experiences she had with her friends and granddaughter at the parks.

Sally was also an award winning journalist. Her contributions as Managing Editor at the Sequoyah County Times led to many awards including the Oklahoma Press Association’s “Better Newspaper Contest” the Sequoyah Award which is the highest honor for the newspaper’s division in 1992, 2002, 2008 and 2012.

Sally was an avid bird watcher and horse lover. She was also the recipient of the AQHA Sprint Award in 1991, 1992 and 1993 for her coverage of horse racing at Blue Ribbon Downs.

Sally was inducted into the Oklahoma Press Association’s Quarter Century Club in 2006. Sally once said, “The award I am most proud of is the Mary Goddard Award for most promising journalist, which allowed me to attend an American Press Institute workshop in Los Angeles.”

She also received numerous awards for her journalistic pieces from many organizations within Sequoyah County.

She was preceded in death by her parents and 1 sister.

Viewing will be 1 – 8 PM Wednesday at Agent Mallory Martin Chapel in Sallisaw, Oklahoma where the family will greet 6 – 8 PM .

In lieu of flowers, memorials may be made to Friends of the Stanley Tubbs Memorial Library.