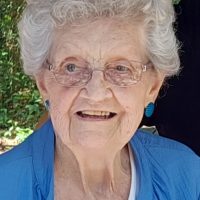 Shirley met her husband, John W. “Dubs” Dillard-but always “Johnny” to her-in the summer of 1954 in Iowa. John was originally from Oklahoma but traveled to the northern United States to build grain elevators. It was love at first sight for both of them, and they were married in just a few short weeks. John & Shirley spent their first few married years traveling between Iowa and Oklahoma as John worked in the north during the summer months, and came back to Oklahoma during the winters.

Shirley became a mother in 1955 while living in Kingfisher, Oklahoma. She was mother to five children-four rambunctious boys and one feisty girl. The family continued to travel between Oklahoma and Iowa until the 1960’s, when they decided to settle down in Oklahoma in the small town of Sallisaw. Shirley and John each took a job working for Central Public Schools-Shirley became a cook for the school cafeteria. Shirley once said that being a cook at the school was probably her favorite job, saying, “I liked to cook and we had a lot of people to feed!” It’s been said many times over the years that Central made the very best yeast rolls, made fresh each morning with the help of Shirley.

In the late 1970’s Shirley and John purchased a broken-down backhoe. John soon had it running again, and from this purchase was born JW Dillard Construction-a family business and legacy that lives on to this day. John did the dirt work and Shirley did the books and accounting. They provided dirt work services to the Sallisaw area for over 20 years before passing the business on to their youngest son, John.

Lastly, Shirley was a member of Hanson Baptist Church for over 50 years, where she taught Sunday School and played the organ. She was a very talented organist and instilled a love of music and singing in many of her grandchildren. Her faith was strong, and she was the epitome of the Proverbs 31 woman. To paraphrase, “She has been worth far more than rubies. She was always strong and dignified. She spoke with wisdom, and faithful instruction truly was always on her tongue, and her children, grandchildren, friends, and all family most assuredly have called her blessed. And now, she has been given her reward and her works have brought praise at the city gate.”