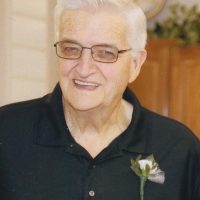 Services for Thomas Joseph Young, 82, of Vian, Oklahoma, will be at 2 pm on Saturday, Setpember 8, 2018 at Westside Church of Christ in Vian, Oklahoma. Burial will follow at Garden of Memories Cemetery in Vian, Oklahoma under the direction of Agent Mallory Martin Funeral Service, Inc.

Services for Thomas Joseph Young, 82, of Vian, Oklahoma, will be at 2 pm on Saturday, Setpember 8, 2018 at Westside Church of Christ in Vian, Oklahoma. Burial will follow at Garden of Memories Cemetery in Vian, Oklahoma under the direction of Agent Mallory Martin Funeral Service, Inc.

Thomas Joseph Young passed away September 5, 2018 in Muskogee, Oklahoma. Tommy was born June 1, 1936 in Seminole, Oklahoma to the marriage union of Albert Clifton Young and Ethel Evelyn (Courtney) Young. He was named after both of his grandpas. Tommy graduated from Vian High School. It was there in his 10th grade year, that he met the love of his life. The new girl in school. He said “I knew that she would be my girl as soon as I saw her”, so on September 16, 1955, Tommy married that girl, Glenda Louise Johnson. Their love has sustained them for nearly 63 years. Tommy and Glenda have four children, Thomas Joseph Young, Jr., Robert Glen Young, Paul David Young and Angela Kaye (Young) Wilhite.

Tommy spent many years in faithful service to the Lord’s church. He was baptized into Christ in 1954 at the Church of Christ in Vian, Oklahoma. He was an ordained minister. Tommy started his education at Union Public Schools in Tulsa, Oklahoma. He graduated Vian High School in May 1955. Tommy attended and graduated the Sheet Metal JAC Training School from 1955 to 1959. He became a licensed sheet metal worker and later a license mechanical contractor. Tommy has served on the executive board of the Sheet Metal Local Union #270 in Tulsa, Oklahoma. He also served 17 years (1976-1993) as a board member of the Vian Public School Board of Education, many years as President. In 1977, Tommy and Glenda opened Young’s Sheet Metal, Inc. in Muskogee, Oklahoma. Tommy conducted his business as well as his life dealings with integrity. He had a great work ethic and he never retired. He loved his work. In 2009, Tommy and his wife Glenda were both honored as Vian Oklahoma’s Favorite Son and Daughter. He was under the attentive and loving care of his cardiologist Dr. Ye Se Ong for 33 years.

Pallbearers will be Robert Young, Paul Young, Dennis Wilhite, Johnathan Young, Zachary Wilhite and Jeremiah Young. Honorary Pallbearers will be the men of the Westside Church of Christ, Vian, Oklahoma as well as the present and past employees of Young’s Sheet Metal, Inc.

Viewing will be Thursday 4 – 8 pm and Friday 10 am – 8 pm at Agent Mallory Martin Funeral Home in Sallisaw.
The family will greet Thursday from 6 – 8 pm at the funeral home.