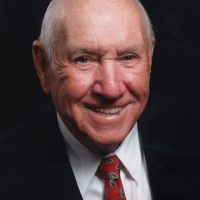 Tom Collins Lewis was born on April 3, 1926 in Paw Paw Community, Oklahoma to Lou Vennie (Lee) Lewis and Fount Elzie Lewis and passed away on July 24, 2022 in Van Buren, Arkansas. Tom was the youngest of 10 children. He was married to Nora Mae (Farmer) Lewis on April 1, 1944 in Muldrow, Oklahoma. He graduated from Muldrow High School in 1944.
Tom was a patriot. He answered the call of duty and proudly served his country in the United States Army during World War II. Tom served under General Patton’s Third Army in the 5th Infantry Division. He bravely toured in the European Theater where he fought in the Battle of the Bulge.

After his military service, Tom returned home to his wife and daughter, to enjoy the life of freedom that he had fought for. He found work in the furniture business for a number of years at Ward’s Furniture. Upon its closure he went to work at Baldor, from which he retired. During this time, Tom began to pursue his dream of building a farm and raising cattle. He started out with only five cows and a bull.

In retirement, Tom was very active in his community. He was a member of Eastern Star and Bruton Lodge #30. He enjoyed living on his land, raising cattle, and growing a beautiful garden. He also loved to hunt and looked forward to the annual pheasant hunting trip with all of his hunting buddies.

Tom was a member of Muldrow First Assembly of God Church. In 2009, he was recognized for his 30 plus years of faithful service as a deacon. He was the first person to have been bestowed the distinguished title of “Honorary Lifetime Deacon”.

Tom loved his family deeply, his family was his world. He loved his daughter, grandkids, and great-grandkids. He made sure that each family member knew they were loved and appreciated. Even at 96 years old, he remembered every family member’s birthday, and made sure they got their birthday gift.
He faithfully loved his wife, Nora Mae, of 72 years. They built and enjoyed a wonderful life together. He was true to his vows to the very end as he fulfilled his promise to love and care for Nora Mae in both sickness and health until death did they part.

Tom was truly a devoted husband, father, and PaPa. Above all and most importantly, Tom was a faithful and devoted Christian. He made sure that his family knew that he was praying for them daily. He also made it very clear that he knew where he was going and was ready to go. Tom will be greatly missed by all of us, but we rejoice in knowing that we as Christians will be reunited again.

and several nieces, nephews, cousins, other relatives and friends.

Viewing will be 1 – 8 PM Wednesday at Agent Mallory Martin Chapel in Muldrow, OK where the family will greet 6 – 8 PM.