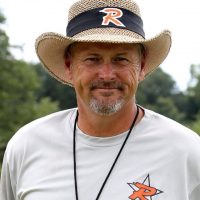 Funeral service for Waymon Gene Potts, 50 of Roland, Oklahoma will be at 12:30 PM on Monday, November 11, 2019 at Roland High School Gymnasium in Roland, Oklahoma. Burial will follow at Roland City Cemetery under the direction of Agent Mallory Martin Funeral Service, Inc.

Funeral service for Waymon Gene Potts, 50 of Roland, Oklahoma will be at 12:30 PM on Monday, November 11, 2019 at Roland High School Gymnasium in Roland, Oklahoma. Burial will follow at Roland City Cemetery under the direction of Agent Mallory Martin Funeral Service, Inc.

He was born on June 13, 1969 in Muskogee, Oklahoma to Hellen Lura (Clark) Qualls and Jackson Lee Potts and passed away on November 6, 2019 in Roland, Oklahoma. Waymon graduated from Porum High School in 1987 and attended the University of Central Oklahoma where he played football. From college, he served 4 years in the U.S. Navy and then returned to UCO to complete his Education Degree. He received his Masters in Education from East Central University in May 2018. Waymon taught and coached at several schools including Okemah, Tecumseh, Bristow, Stigler, Hugo, Westville, Wetumka, Maysville and Roland.

During Waymon’s time at Wetumka, he met Kasi Stephens and her boys, Cole and Chase. They became a family on July 20, 2013 and on December 12, 2014, their family grew with the addition of twin boys, Riley Quinn and Landry Easton. In 2015, they made their home in Roland, OK where Waymon taught Computer Applications and coached the Roland Rangers until his passing. He became head coach in 2018. Football was not just his occupation, but his passion. He not only enjoyed coaching on Friday nights, but also working with the youth leagues on weekends. Waymon’s greatest love was his family, especially his wife and boys. When not coaching, he could be found in the stands being his boys biggest fan.

wife: Kasi Potts of the home;

sons: Cole, Chase, Riley and Landry of the home;

several nieces, nephews and a host of friends and fellow coaches.

He was preceded in death by his father: Jack Potts and his brother: Brandon Potts.

Viewing will be 10 am – 8 pm Saturday and 2 – 8 pm Sunday at Agent Mallory Martin Chapel in Muldrow, OK where the family will greet 2 – 5 pm Sunday.