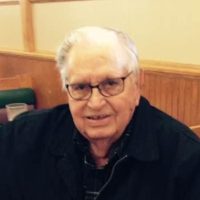 William Martin Willis was born November 18, 1926 to Grover Cleveland Willis and Charity Mae (Wright) Willis at Welling, Oklahoma. He passed away January 28, 2022 at the age of 95. From there he began curating an accumulation of stories and experiences to share over the next 95 year. Being one of 11 children provided plenty of adventures and life lessons well learned while the family farmed, cut wood, and other labor intensive jobs to make ends meet. Not many six year olds fed sorghum into a mill before school and sawed logs for splitting after, but for the Willis boys it was a way of life. In his 2016 partial biography “Big Bill’s Biased Bio”, Bill shared a lesson learned early on. In a family of 11 children “crying doesn’t always work” when you are trying to get your way.
At the age of 17 and without finishing high school, Bill enlisted in the Navy on Nov. 29 1944 where he served 21 months as a hospital corpsman at the end of World World II. When he was discharged he decided to be an educator. He finished his high school career by taking the GED. He was grateful for GI Bill which allowed him to attend Northeastern State Teacher College. There he earned a bachelor’s degree in industrial art education as well as a master’s degree in education. He also worked for the Boy Scouts of America and stayed busy during the summers working for the Army Corps of Engineers. Again according to “Big Bill’s Biased Bio’, his teachers had a tremendous influence on him. According to Bill good lessons are easy to learn.
He began teaching at Blackgum around 1950. Then he moved on to Braggs. He began teaching Vian grade school, then some 30 years later he retired as the Principal of Vian Grade School. He was a tinkerer; whether woodworking, gardening, or grafting, he always had a project or two at hand to show or share.
Around the time he started teaching he met and fell in love with Phyllis Wynne Pack. They were married 53 years. The couple settled firmly on Blackgum Mountain near Phyllis’s parents. Big Bill and Phyllis became parents to William (Bill) and Cynthia (Cindi). He was ordained in 1952 as a priest in the Community of Christ church at Blackgum. Bill was a fixture of the Sequoyah County Retired Teachers Association and operated the polling facility at Blackgum for many years. During retirement Bill and Phyllis traveled the world including more than 10 trips to England, Scotland, and Ireland. In all he did he continued to amass stories, friends and lessons.
He showed his love for his family and God throughout his life, and he had many, many friends both near and far. He will be greatly missed by his family. I think the biggest lesson he has taught us is “Everyone has a story to tell—many stories in fact,”
Bill was preceded in death by his parents; his wife Phyllis; brothers, Mike, John, Sog, and Mug; sisters Francis, Sadie, and Mabel; and brother-in-law Neal.
He is survived by son and daughter-in-law William and Cindy Willis (Poteau); daughter and son-in-law Cynthia and Kelvin Jamison (Sallisaw); Grandchildren- Marc and Ashley Willis, Tori and Blake White, Trey and Chelsie Weaver, Sarah and Ryan Wilson, Megan and Cole Forsberg, Kelsey Jamison and Kelsey Weaver. He also is survived by brothers, Paul and Lonzo and sister, Leona; and sister-in-law, Doris.
15 great grandchildren, numerous nephews, nieces, cousins, and close friends.