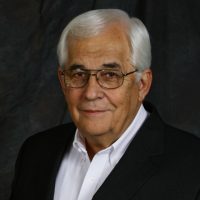 Funeral service for Wylie P. Cole, 88, of Sallisaw, Oklahoma will be at 1:00 PM on Thursday, September 26, 2019 at Immanuel Baptist Church in Sallisaw, Oklahoma. Burial will follow at Stilwell City Cemetery in Stilwell, Oklahoma under the direction of Agent Mallory Martin Funeral Service, Inc.

Wylie Paul Cole was born on May 28, 1931 in Stilwell, Oklahoma to Sinthye Ruckman Cole and Wylie William Cole. He passed from this life on September 20, 2019 in Vian, Oklahoma.
He was married to Wanda Ramsey of Stilwell on December 30, 1953 in Tahlequah, Oklahoma.

Wylie left Oklahoma at the age of 19 to serve his country in Korea and spent the next 6 years in various locations with the U.S. Army.  Upon his discharge from the military in 1956 Wylie moved his family to the Tulsa, Oklahoma area where he attended the International School of Barbering. After graduating Wylie accepted the role as manager and instructor and spent the next 8 years there.  In 1967 Wylie purchased Utica Square Barber Shop and enjoyed a very successful career until 1982 when he sold the business to pursue his calling in ministry.

Wylie was proud of his Cherokee heritage and spent much of his leisure time creating walking sticks and ceremonial items in the tradition of the tribe.  He was also a strong advocate and supporter of all U.S. veterans.

wife: Wanda of the home;
2 daughters: Kimberly Cole-Sisemore and Tim of Sand Springs, OK and Melissa Cottrell and Keldon of Hobbs, NM;
1 son: John Cole and Marchita of Oklahoma City, OK;
6 grandchildren and 12 great grandchildren;
several nieces, nephews, cousins, and many other relatives and friends.
He was preceded in death by his parents, 2 brothers: 1 infant and Charles “Joe” Cole and 1 sister: Martha Florene (Rene) Thurber and a granddaughter: Larissa Cottrell.

Funeral service will be at 1:00 PM on Thursday, September 26, 2019 at Immanuel Baptist Church in Sallisaw, Oklahoma. Burial will follow at Stilwell City Cemetery in Stilwell, Oklahoma under the direction of Agent Mallory Martin Funeral Service, Inc.

Viewing will be 10 AM – 8 PM Wednesday at Agent Mallory Martin Funeral Home in Sallisaw, Oklahoma where the family will greet from 6 – 8 PM.